It seems to me, as a consequence of patients (about 500 at the date this is published) being displaced to hospitals in other départements than the origin,  that the number of beds is artificially decreasing in places (in the “Est région” mainly) and artificially increasing in others (e.g. Loire ?).

What is the utility of publishing area (department) statistics, if they do not reflect the cases originated in the area ?

Both population and density of population are significant factors in explaining the COVID-29 outbreak in France. With an adjusted R squared of  79.5%, the regression is close to reach the norm of 85%  (see also F and T statistics)

The slopes of the least squares adjusted lines continue rising, especially concerning population density. The concentration in population is the main influence behind the expected increases. The coefficient has risen, sofar, to 0,11. This represents the incremental increase in hospitals bed requirements, when population density increases by 1%. In other words, for every 10%  increase in population density, there is a need of 1 additional hospitalisation bed resulting from COVID19 infection. E.g. with a density of 20860, the needs for Paris are of some additional 2000 beds, as of April 3rd .

This is an analysis based on public data, and subject to revisions or errors including the processing.

The StatAdvisor
The output shows the results of fitting a multiple linear regression model to describe the relationship between COVID19 in hospitals 200403 and 2 independent variables. The equation of the fitted model is

Since the P-value in the ANOVA table is less than 0.05, there is a statistically significant relationship between the variables at the 95.0% confidence level.

The R-Squared statistic indicates that the model as fitted explains 79.9998% of the variability in COVID19 in hospitals 200403. The adjusted R-squared statistic, which is more suitable for comparing models with different numbers of independent variables, is 79.5916%. The standard error of the estimate shows the standard deviation of the residuals to be 201.308. This value can be used to construct prediction limits for new observations by selecting the Reports option from the text menu. The mean absolute error (MAE) of 131.79 is the average value of the residuals. The Durbin-Watson (DW) statistic tests the residuals to determine if there is any significant correlation based on the order in which they occur in your data file. Since the P-value is less than 0.05, there is an indication of possible serial correlation at the 95.0% confidence level. Plot the residuals versus row order to see if there is any pattern that can be seen.

In determining whether the model can be simplified, notice that the highest P-value on the independent variables is 0.0000, belonging to Population. Since the P-value is less than 0.05, that term is statistically significant at the 95.0% confidence level. Consequently, you probably don’t want to remove any variables from the model. 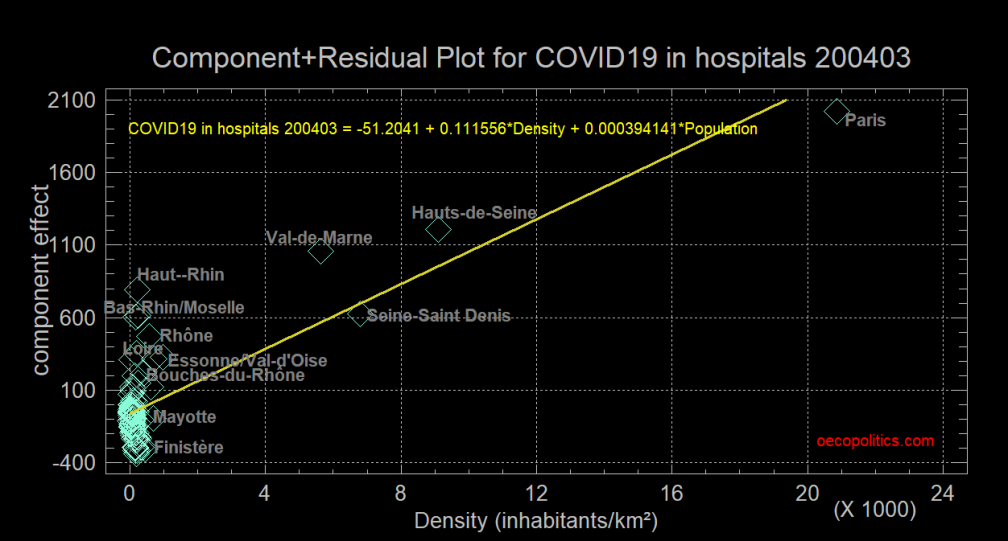